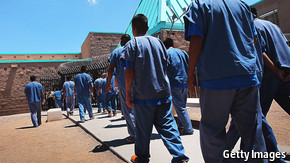 wrote an irate reader of The Economist, David Donnelly, a year ago from Bangkok.

After all, they have broken the law. But more significant by far is the message that any kind of amnesty sends to the millions of people trying to emigrate to America who follow the rules but are turned down.

I have worked in Thailand for 15 years and I see daily the hundreds of Thais visiting the American embassy to try to emigrate by adhering to our procedures; less than 3% gain admission. The situation is the same all over Asia and the developing world. There is little sympathy for those who don’t get a visa. Yet illegal immigrants from Mexico are to be rewarded for violating the law merely because America shares a border with Mexico.

Such a policy promotes rather than discourages illegal immigration. Nothing could be more illiberal and cruel, and nothing impoverishes America more than rewarding those who violate its laws. Few, if any, “nativists” oppose letting talented and educated immigrants into America legally.